“I often get the feeling that things around me have lost their proper balance, though it could be that my perceptions are playing tricks on me."

A fresh perspective on the imbalance between animals and humans, Haruki Murakami’s short story “The Elephant Vanishes” explores the troubling paradoxes hidden in the relationship between humans and animals.

Perhaps there is nothing so obvious or transparent about our shared experiences that we might be able to use the phrase “the elephant in the room” with any sense of unifying concept. This phrase and the challenges it brings to the notion of perspective is precisely what Haruki Murakami tries to question in his short story, “The Elephant Vanishes.”

“The Elephant Vanishes” was initially published in 1985 in Japan and first appeared in The New Yorker in 1991. The final tale in the short story collection by the same name was translated into English and published in 1993. Jay Rubin, one of Murakami’s frequent translators, calls this story one of Murakami’s finest and labels it a masterpiece. I wholeheartedly agree. The story explores themes of perspective, interpretation, and unity, and in true Murakami fashion, it is a little weird.

Another reviewer appreciates the story but cautions against over-analyzing this story and Murakami’s novels in general:

“Haruki Murakami’s stories are difficult to describe and one should, I think, resist attempts to overanalyze them. Their beauty lies in their ephemeral and incantatory qualities and in Murakami’s uncanny ability to tap into a surreal collective unconscious. In the introduction to a story collection, Murakami writes how writing a novel is a challenge and how writing short stories is a joy. “The Elephant Vanishes” is indeed a joy.”

Alas, reading constructively is a joy, so we will press on with open hearts and curious minds, eating the elephant one bite at a time. Before we start, I must say that the first words Murakami ever wrote echo in my memory as I begin anything he writes:

There’s no such thing as perfect writing. Check. But wait, there is something else on the page that readers might find interesting. What follows that very first paragraph is an exciting second paragraph in light of our reading this week:

“All the same, I despaired whenever I sat down to write. The scope of what I could handle was just too limited. I could write something about an elephant, let’s say, but when it came to the elephant’s trainer, I might draw a blank. That kind of thing.”

Let’s take a quick detour because reading beyond Murakami means exploring all that came before. “The Elephant Vanishes” reads like a narrative descriptive essay, a style that closely resembles George Orwell’s highly anthologized “Shooting an Elephant” (1936).

Orwell’s essay follows a police officer narrating what occurs after an elephant turns “bad,” malls a village, and incites fear among the crowd. More pointedly, though, the story criticizes themes of imperialism. The narrator shoots the elephant, despite his conviction that he should do no such thing, and does so because of the pressure put on him by the crowd.

Once again, though, the style of the essay is similar in structure. Whereas a newspaper article would report the news without drawing conclusions or passing judgment, the narrator of both stories reports the happenings with details.

Through Orwell’s narrator, we are taught a critical piece of wisdom that we would do well to keep with us as we read Murakami’s story:

“[A] story always sounds clear enough at a distance, but the nearer you get to the scene of events the vaguer it becomes.”

“When the elephant disappeared from our town’s elephant house, I read about it in the newspaper.”

With lightness and inquisition, we approach Murakami’s short story, “The Elephant Vanishes.” The first sentence sets up the narrative and reveals a mystery of some kind that will follow, but the second sentence immediately derails the reader’s mental train from its tracks. 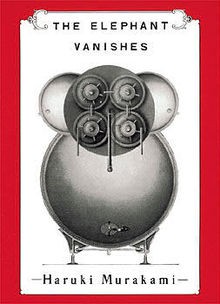 This is only the first of many clues that reveal the narrator’s unhinged. The best part is how these moments are peppered into the narrative with such subtlety.

The reader follows along when each moment is revealed, willingly suspending their disbelief.

We learn the narrator is following the investigation into the disappearance of his town’s elephant. He has a vested interest, although why this is the case is not immediately revealed.

He reads the newspaper story repeatedly, keeps a scrapbook to collect pieces of his investigation, and when he fills it up, he gets another one.

In describing how the elephant came to be a central figure in the town, we see the level of empathy the narrator feels for the elephant:

“And so, after its companions were gone, the elephant stayed alone in the decaying zoo for nearly four months with nothing to do — not that it had had anything to do before.”

These peculiar moments that provide insight into the narrator’s mind are layered. He remains utterly enthralled and interested in the fate of this elephant. He is not entirely alone in this interest.

After all, the elephant is a kind of town mascot. His interests reach an entirely different level, though.

Before we learn of his elephant-watching habit, he invites us into the town mystery. He reveals that he has not shared his knowledge of the elephant’s disappearance with the proper authorities.

We also learn that he finds it absurd that the evidence doesn’t lead the media or the government to recognize that the elephant has vanished instead of escaping.

“Riddled as it was with such perplexities and labored circumlocutions, the newspaper article as a whole left but one possible conclusion: The elephant had not escaped. It had vanished.“

He then adds evidence that reveals conspiracy theories are brewing in his head:

“Needless to say, however, neither the newspaper nor the police nor the mayor was willing to admit — openly, at least, that the elephant had vanished.”

The narrative pivots when he recalls meeting a girl at his company party. We add a few more layers of depth and absurdity to the narrator’s character through conversation.

In a persona designed to sell, he discusses the average woman’s ‘kit-chin’ and her need for unity in this space.

“Even the most beautifully designed item dies if it is out of balance with its surroundings.”

This line tends to haunt readers, but I suspect what the narrator intuits here is how perspectival balance is a personal matter. It is difficult to sell because the need for balance changes from person to person and kitchen to kitchen.

The two hit it off and strike a kind of balance in conversation until the narrator’s parapraxis, or Freudian slip, reveals the elephant (not) in the room: the missing elephant. The exchange that follows continues to highlight the narrator’s oddities.

As he relays the events and his side of the story to the woman he meets, he explains with conviction and certainty that the elephant and his keeper will never return.

The narrator admits to the woman how he witnessed deep affection and friendship between the elephant keeper and the elephant. This observation demonstrates that balance is a personal matter but also reveals how alienated the narrator feels from his community.

He is unable to communicate to the proper authorities how the elephant keeper and the elephant must have necessarily grown bigger or smaller. Admittedly, there is nothing routine or pragmatic about this conviction.

The most extraordinary sense of imbalance comes from the townspeople’s fear that they are not in control of the elephant as they thought.

Even though they celebrated this creature, they confined the elephant to captivity.

Perhaps the disappearance is a reminder that nature requires reciprocity from humans instead of exploitation. When we fail to give to nature the way she gives to us, inevitably, the elephant vanishes.